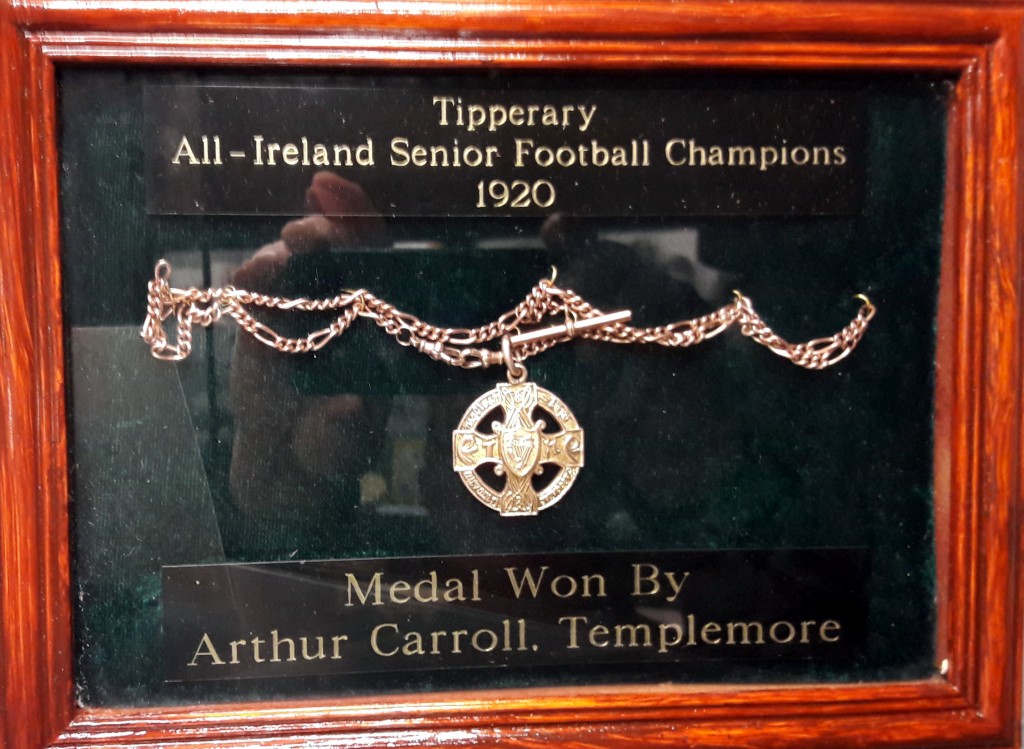 All-Ireland senior football medals are scarce in Tipperary. Although the county has won four senior football finals: 1889, 1895, 1900 and 1920, it is almost a century now since the last title was won. This makes Arthur Carroll’s All-Ireland football medal, on display at Lár na Páirce museum, all the more precious.
Arthur, a native of Forrest, Templemore, was Tipperary’s goalkeeper from 1917 until 1926. He possessed all the necessary requisites of a great goalkeeper-quick reflexes, sure hands and a sharp eye. This was a period when the standard of football in Tipperary was high and the county could successfully compete at the highest level. Arthur played in five Munster football finals, winning three.
He was on the Tipperary team that lost the 1918 All-Ireland final to Wexford but won this supreme accolade in 1920, beating Dublin by 1-6 to 1-2 at Croke Park. The final wasn’t played until 11 June 1922, the delay caused by the War of Independence. Republican activist, Dan Breen, threw in the ball to start the game, which was attended by 25,000 spectators. This was the first time these teams had met since Bloody Sunday (21 November 1920). Arthur was selected to represent Tipperary at Croke Park on Bloody Sunday, but he was unable to play due to the recent death of his mother. Played on a baked ground and under a broiling sun, there was very little to choose between the teams and Dublin led by 1-2 to 0-3 at the interval. Tommy Powell’s second-half goal gave Tipperary the lead, which they never relinquished. Arthur Carroll was one of the heroes of the hour, making some splendid saves. Overall, it was Tipperary’s pace, tremendous stamina and indomitable spirit that ensured their success.
Tipperary: Arthur Carroll (goal), Jimmy McNamara, Ned O’Shea Capt., Dick Lanigan, Bill Ryan, Jerry Shelly, Bill Grant, Bill Barrett, Mick Tobin, Jim Ryan, Jimmy Doran, Gus McCarthy, Vincent Vaughan, Mick Arrigan, Tommy Powell. Substitutes: Tommy Ryan, Mick Nolan, Ned Callaghan, Tommy O’Connor.
Arthur Carroll’s name is remembered at Templemore’s G.A.A. clubhouse named – the Carroll and Grant pavilion. (Bill Grant was the second Templemore player on the 1920 All-Ireland side). Arthur Carroll, who was married to Mary Maher had six children, three boys and three girls, died in 1959 and was buried in Templemore. The medal was presented to the museum by his daughter, Mrs Josephine Brennan.